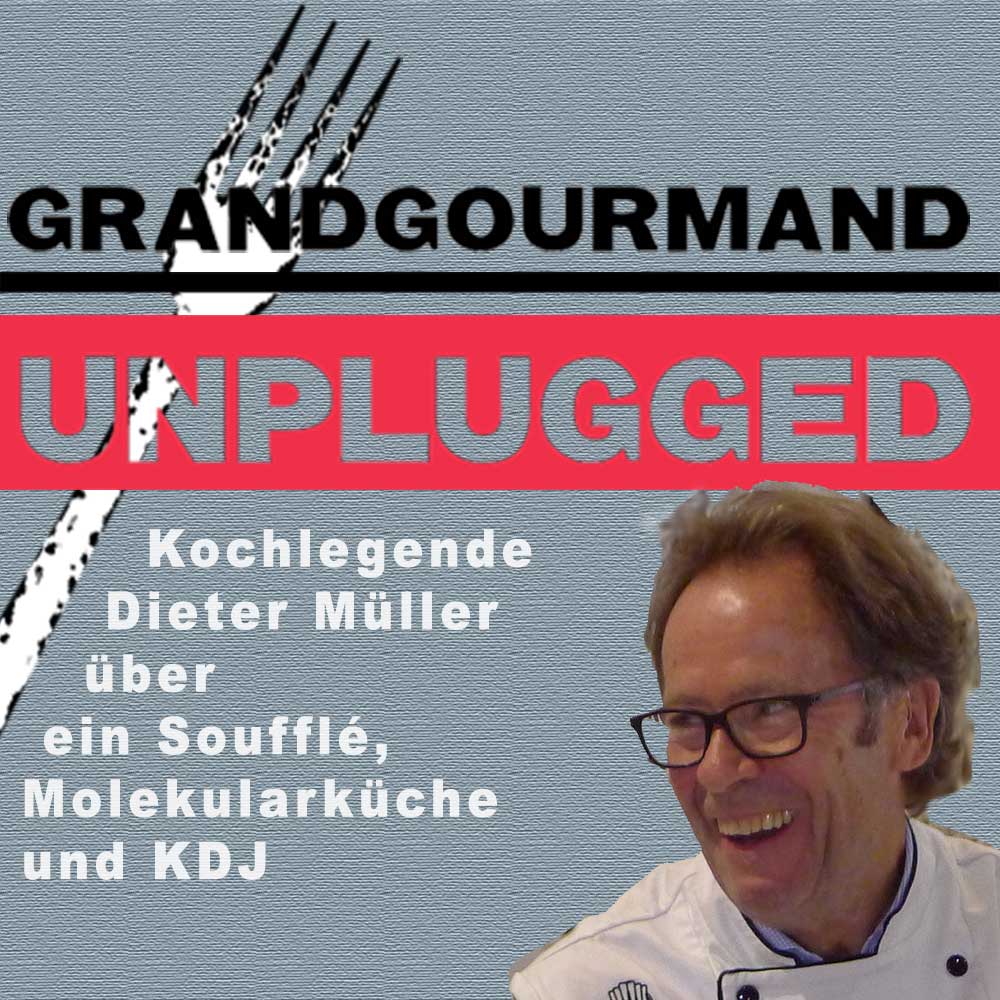 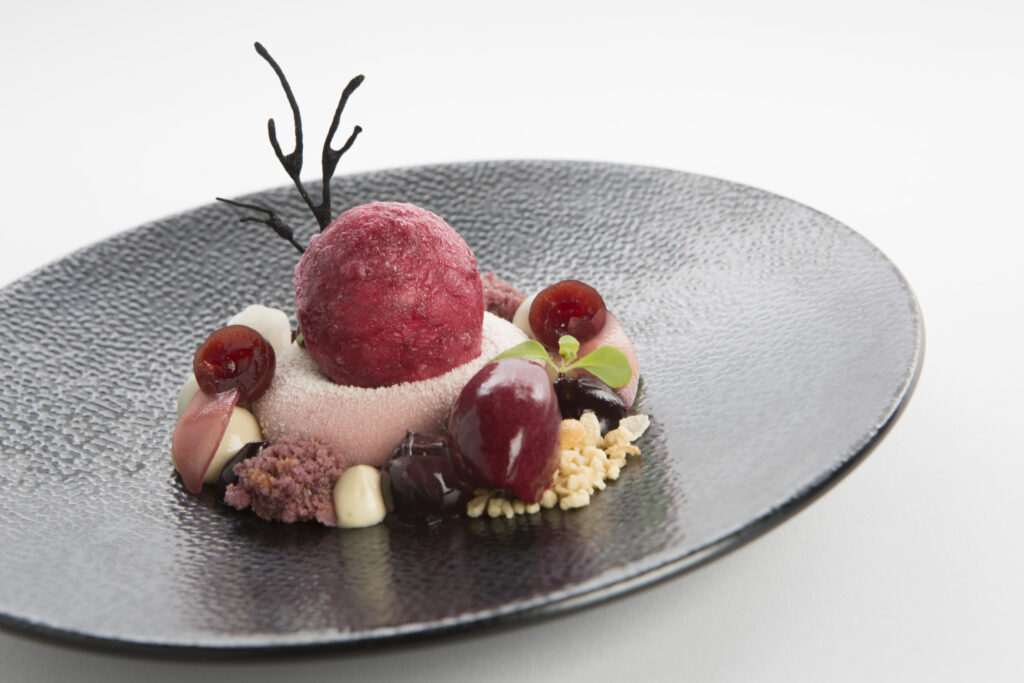 In Japan, the cherry blossom symbolizes beauty, departure and transience. The young Tatsuya Shimizu understands how to implement this poetic claim in his signature dessert. An allegedly narrow spectrum of aromas is masterfully realized, yet it is neither one-dimensional nor reduced. The composition is technically demanding, Shimizu pulls out all the stops to realize his concrete idea. A cherry jelly Donut makes friendship with a cherry sorbet. Crumble from the Azuki bean and Mochi rice set fine accents, the dessert naturally follows the Japanese tradition, but is still modern. A balloon made of rice paper is dyed and filled with a cherry cream, resulting in interesting textures. The basic accord is cherry, over this Tatsuya sets playful descant aromas, dramatically thought out. The dessert is a damn good palate flatterer!

The second episode with Dieter Müller is about a soufflé, molecular kitchen, football and the Cook of the Year competition.

A jury member for Chef of the Year must have experience, passion, technical know-how and patience. You will taste different creations one after the other for hours.

Isn’t it very difficult to set the culinary memory to zero after each dish, in order to give an objective assessment, so that you can even still perceive it sensually?

You need a good physical condition, which is the prerequisite for tasting in this competition. During the tasting you have to neutralize with little wine and lots of water.

I demand fitness from the jury and I’ve decided: Everyone evaluates for themselves!

In my youth I took part as a sous-chef in two different competitions and won them both. That is the ambition, my wife claims that it is even an exaggerated ambition, which I of course see quite otherwise. There is a lot of passion behind it, you always want to win, the worst thing is to lose!

Seasoning, cooking points and small surprises are very important aspects for me. But the sauces are also crucial, they are pure culinary art, the first years I missed them.
You know, in the beginning there was much influence of Ferran Adrià with this aroma elements on the plates.

Nevertheless, it is still difficult with molecular cuisine in Germany, and this is already starting to fade away. Many techniques have been incorporated into the traditional kitchen as well.

One day I was working on a soufflé Loup de Mer, thinking about how best to realize it.
When the soufflé comes out of the oven and is quite loose, it sometimes gets bumps, collapses with the slightest draught.
I have prepared a crustacean stock with agar-agar, which is an algae substance that serves as a binder, Ferran Adrià has worked a lot with it. Agar agar is brittle, I added a certain amount of leaf gelatin to change the molecular structure. The rear was poured two millimeters thick on stainless steel sheets. I cut suitable shapes from it and put them over the soufflé still standing in the oven, it was covered with a skin, sensational!
One guest wanted to know how to make this soufflé look so nice, I explained it to him, he pulled his eyebrows up and said to me in amazement:”Excuse me? You’re already cooking molecularly too?”
So you can see that when you are creative, you can make great use of modern technologies.

Are there any moments when you wish that, similar to football, a substitution player might come in and you could sit on the bench for a while?

Counter-question: Can a Lionel Messi be skipped in a soccer team? Recently I was actually introduced as the Lionel Messi of German chefs, but I am more in the category of Uwe Seeler.
Uwe Seeler was a stand-up man, a fighter, never laid down a swallow.
You can’t take such individualists, such experts out of the game.

I have helped to develop the competition and I am always there.
It’s a big responsibility. Subconsciously, I compare all the candidates. In my mind I simulate what is happening, let everything happen in my spiritual eye, I have a lot on my mind.

It also depends on the little things, after all, it’s the best chef of the year.
I’ll try through all the candidate plates from start to finish.

The last issue in particular was an absolute highlight, an increase over the last few years. In the beginning the competition was difficult. I have appealed to chefs in the media to send talented cooks to Chef of the Year.
The first two years I only thought that it must be similar to Spain, I was there in 2010 at the finals. The Spanish wanted me to be there, it was an incredible atmosphere.

It should be noted that it was cooked there in a simpler way, with plenty of olive oil and little sauce.

They were then also Spanish in the jury, they were very surprised by the level.
I think German chefs have become more creative in terms of harmony and versatility on the plate, they have learned a lot!

The Spanish are like the Italians, for them: Less is more! That’s often true, I support that, but there has to be some sauce. I also like a mixture of stewed and fried meat and of course fish. Make me a fish with sauce!

In the meantime, a lot has been implemented, and it goes back to its roots.
In the jury we were all thrilled, a WOW experience, there were not only two favorites but actually four, at the top it was really close.

When I degust, I first try to identify the objects. Afterwards I order the elements thoughtfully into chords to recognize the intention. In the end, I see the culinary construction in front of my eyes.

A chef tries – in the best case – to bring his or her very own idea to the guest with passion and heart. There are many ways to achieve this: deconstruction, reduction or working with additive elements to create interesting aroma chords.

What is the concept of the KDJ jury to assess all candidates as fairly as possible?

Of course, the reduction and working with aromas, spices and herbs is important!
Nothing is worse than a dish that is either bland or too salty. Salt is a flavour enhancer, just like sugar, but everything has to be dosed, a dish needs an increase from beginning to end.
Each juror has his or her own personal experience, the specifications are discussed at the beginning, the evaluation is strict.

Of course, however, a jury member from Spain has a different view of things. A chef should be an aesthete, and his workplace must reflect this, in the kitchen it should be inviting and even something like that is evaluated.
Often it is the little things that are important when finishing a dish, everything has to run smoothly, the favourite pan is quickly washed or the knife sharpened.

This is not easy for the candidates, as the ANUGA they had to work in small cells, but the results were still on a star level. 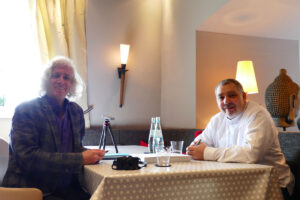