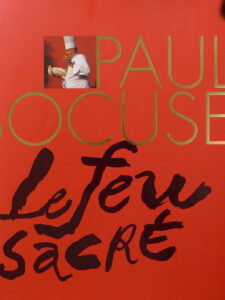 Le feu sacré, the holy fire, a wonderful title for this biography, seldom fitting to a figure like here. The flame that led Paul Bocuse to immortal fame is said to never run out.
Please forgive this pathetic opening, but Bocuse himself loves the pathetic, the extraordinary, at the same time he is full of friendly humanity, he is an artist, worker and gourmet in one. His ideas have revolutionized French and thus the international cuisine, the term “Nouvelle Cuisine” went around the world and animated the culinary art with new ideals.
In 2005, Bocuse celebrated its incredible anniversary: 40 years of the Michelin star. An astonishing and lonely record, it was time to finally shed light on the life of the great Frenchman, and so this book was published by Glénat Publisher and written by Ève-Marie Zizza-Lalu. She has known Bocuse since she was seven years old, and she also had the opportunity to get to know him better in private interviews at the Restaurant de Collonges on Mont d’ Or and at the hunting-house.
Each chapter is introduced with personal notes by the chef of the century. Certain events are highlighted and personalities who have influenced Bocuse are described.
Especially Fernand Point is mentioned, he writes about him:

Fernand Point was my pygmalion, the example to follow, in the kitchen as in life. He was a giant in every way. A generous and talented man, one of us, a great worker. All those who were allowed to work with him became excellent professionals.

Point has played his part like no other in turning Bocuse into what he finally became, the most famous chef in the world.
Cooks go through a school like some artists do, and they also have a sponsor, a mentor. Fernand Point taught the young Bocuse after the Vienna School, not an Austrian Viennese school but a very French “Viennese School”.
During the German occupation Bocuse joins the Resistance and gets injured, one bullet barely misses the heart. In an American field hospital he fights for his life, later he jokingly quotes this time as saying that there is a lot of American blood flowing through his veins. 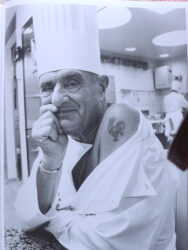 In 1958 he fought for the first Michelin star and in 1965 his Hummer Mousse “à la Constant Guillot” was awarded the third star, now he is a superstar among the chefs and his reputation is spreading all over the world.

The book is full of interesting anecdotes and stories, besides, it is brilliant with innumerable photos, partly taken by Bocuse himself, partly of historical nature, the abundance of the pictorial material alone is reason enough to get hold of the work. His most famous recipes are part of the publication, where they include the “Ham in the Hay”, the Gratin Dauphinois “Fernand Point”, the “Gratin d’ Ecrevisses” and of course the “Soupe aux Truffes VGE”. 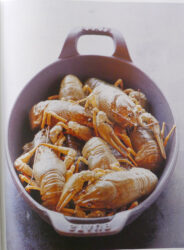 There is a foreword by Valéry Giscard d’ Estaing, a great friend of the Master. If you can get hold of another copy and know the French language, this is a very exciting and entertaining biography of perhaps the world’s most famous chef.

Any cookies that may not be particularly necessary for the website to function and is used specifically to collect user personal data via analytics, ads, other embedded contents are termed as non-necessary cookies. It is mandatory to procure user consent prior to running these cookies on your website.